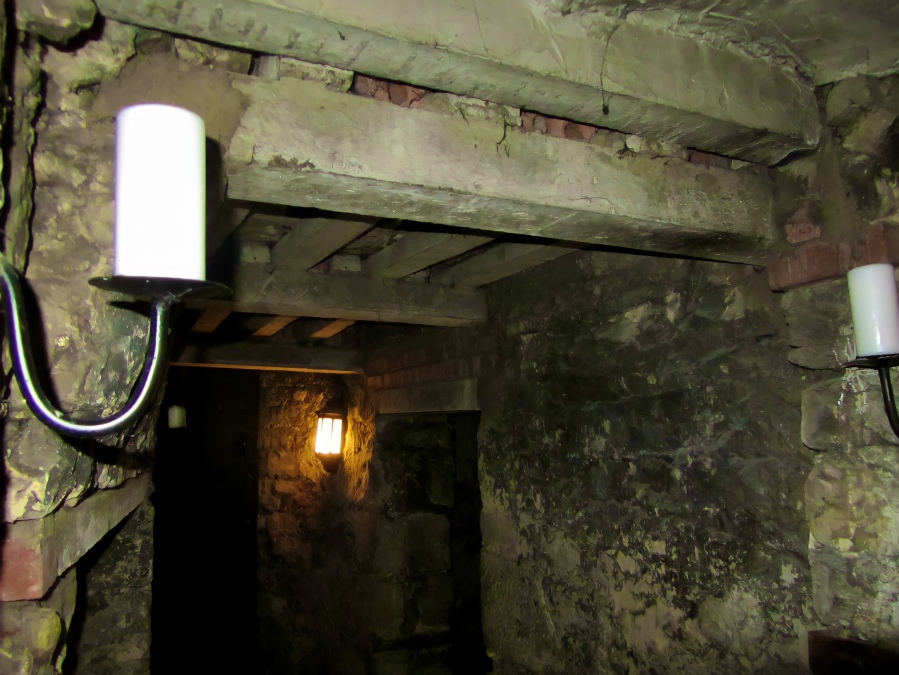 Hands down one of the best experiences of my life, these underground tunnels are incredibly famous in the paranormal community and a big prize for ghost and history lovers alike. Those familiar with my blog know I’m a fan of haunted places, as well as history, so combine the two and I’m in heaven.

I had researched the vaults before we visited, but unfortunately, I didn’t learn enough about many of the various ghosts who haunt them until after the tour… (thanks Zak Bagans and Ghost Adventures). Most of what I read was regarding the history of the vaults.

Even though our tour was marketed as a supernatural-type tour, we didn’t learn much from the guide about the ghosts or supernatural trickeries that happen down there. We booked with Mercat Tours and met our guide at Mercat Cross (naturally), in Old Town. Luckily, it was a small group, about 10 people, which can make a humongous difference in the level of enjoyment you get from a tour. After explaining some brief history about the city of Edinburgh at Mercat Cross, our guide took us on a mini tour of Old Town. We learned some more about the city’s history, including how they used to dump their chamber pots full of urine and feces out the windows like godless heathens. It didn’t matter who or what was standing below, plus people then had to walk through the bodily excrements. We also learned why the alleyways in Edinburgh are called a “close” – the buildings are sooo close that you could reach across and high-five your neighbor. Clever, right?

We finally made our way to the entrance of the vaults, which is enclosed inside a building owned by Mercat Tours. We descended a dark, winding staircase until we were well underground and inside one of the vaults. We went through at least 3 or 4 different vaults of varying sizes. Once down there, it was time for another history lesson, which I shall repeat now…

Built in the late 1700’s, the vaults are a series of chambers formed in the 19 arches of the South Bridge. The bridge (one of four) was built because Edinburgh itself sits atop 7 major hills and the bridges were necessary in bridging (ha) the gaps between these hills. The vaults under South Bridge were used for many things over the decades, including storage of alcohol (both legal and illegal), living areas for the very poor, brothels, party rooms for the rich, storage for businesses (the original purpose), and the preferred route of various grave robbers and a pair of serial killers who sold corpses to the medical school for an extra buck. However, the serial killer claim is disputed based on whom you talk with. Many believe that serial killers William Burke and William Hare used the vaults as a hunting ground for victims (in order to sell their corpses), but there is little to no evidence of it. Nonetheless, it’s etched into Scottish lore.

As mentioned, the vaults original purpose was for storage used by the various businesses that lined the South Bridge, but after they flooded and were abandoned by 1795, they took on a different purpose. That is when the city’s most unfortunate and poor moved in, transforming the vaults into a slum. It became somewhat of a red-light district, with numerous brothels and pubs opening. Unfortunately for those who had to live in these slums, the conditions were atrocious. It was dark, cramped, damp, with no running water or ventilated air, and good sanitation was not practiced. Since they were underground, there were no windows to open for sunlight or fresh air. People were subjected to endless assaults, robberies, burglaries, rapes, and murders. This was due not only to the appalling conditions, but the fact that everyone was literally on top of one another (as many as 10 family members in one small room), and the police didn’t venture regularly down there – if at all.

Eventually, even the city’s poorest and most debauchery-loving moved out of the vaults, after the conditions became simply too unbearable. After that, it’s not exactly known when the vaults closed for good, with some suggesting as early as 1835 and others insisting as late as 1875. Either way, at some point, a bunch of rubble was placed at the entrance of the vaults, and they were forgotten for over 100 years. Then in the 1980’s, Scottish rugby internationalist Norrie Rowan accidently discovered a tunnel to a vault. This tunnel actually allowed him to help fellow rugby player Romanian Cristian Raducanu escape the Romanian secret police and obtain political asylum mere weeks before the Romanian Revolution of 1989.

Norrie Rowan and his son began the excavations of the vaults in the 1990’s, where they found many things, including thousands of oyster shells (a staple of the working class back in the late 1700’s), as well as middens (a refuse or trash heap) containing household items such as old toys, broken medicine bottles, clay pipes, buttons, horseshoes, snuff boxes (tobacco), cracked stoneware and ceramic jars, and pots and plates. While written records were nonexistent in 1700/1800 Scotland, these middens have helped researchers positively establish that people did, in fact, inhabit the vaults at some point.

The bottom line – a lot of super bad stuff happened inside these walls, and allegedly a lot of that bad juju is still down there. 😬

So, naturally, tons of ghostly energy is allegedly trapped inside the vaults. However, our guide, for whatever reason, only talked about 3 ghosts that are said to inhabit these very vaults: the woman in black, a child named Jack, and the infamous Mr. Boots.

I watched the ‘Edinburgh Vaults’ episode of Ghost Adventures a few months after the trip and learned about 5(!!) more ghosts that also allegedly live in these very vaults. I’m rather perplexed as to why the guide didn’t mention them to us. While I throughly enjoyed the tour and experience, let’s be honest, we didn’t book it to stand in the pitch black, in what is essentially equivalent to a giant musty basement, to only learn about how they used to store wine back in 1790.

Nonetheless, the highlight was Mr. Boots because HE was mentioned extensively by our guide, plus I already knew some things about him. Mr. Boots is said to have been a slumlord in the vaults, living there himself. He is also said to have killed a girl down there as well. He is reportedly an angry, malicious ghost with no eyes, who does not take kindly to visitors. His name was born from the heavy footsteps that people claim to hear walking behind them when nobody is there. He is also known to physically attack people, as well as throw stones at them. He has been known to yell “GET OUT!!!” at visitors. There has been numerous audio recordings and pictures supposedly captured of this famed, douchy ghost. Sadly (or luckily, depending on how you view it) no supernatural occurrences happened with Mr. Boots while we were down there.

We also learned about a woman and a child, named Jack. The boy is about 6 or 7, with short curly blonde hair, wearing a blue suit with knickerbocker trousers. He is said to be attracted mainly to women and children and will playfully pull on your hand or tug on your clothes. The woman, or Lady in Black, is said to have been a pregnant woman, dressed in all black, who allegedly told psychics she lost her child at some point, but never said how. Pregnant women who go down to the vaults report feeling an overwhelming sickness while there.

A couple other ghosts said to live in the vaults are The Cobbler and The Aristocrat. The Cobbler is said to be a short, stocky man, who wears a long apron. He reportedly has been seen smiling at people as they pass and is generally considered to be a friendly spirit. The Aristocrat is said to be a well-to-do gentleman in a tall black hat with a beard. He will lean against a wall and grin at people as they pass by. While he is not said to be an evil or mean spirit, like Mr. Boots, many people still report feeling an ominous feeling while near him.

There are also many unnamed ghosts, as well as the sounds of children yelling or women singing. The bridge these vaults sit under was all but destined to be a place where spirits linger. The very first “person” to ever cross the bridge after its completion was a dead woman in a coffin. She was the eldest resident of the bridge area, a well-known and respected wife of a judge, who died several days before the grand opening. Due to their less-than-logical thinking back in these days, they determined that she still had to be the first person to cross since “promises had been made and hands shook”, and the city leaders felt “obligated” to honor the agreement. Therefore, death was the very first thing to ever cross the bridge officially, and it would be death that would remain.

So, if you ever get the chance to head to Scotland, please visit Edinburgh, not only for the super-cool overall historical factor and amazing architecture, but for these creepy and historic vaults. These vaults regularly make the lists of “World’s Most Haunted Locations” and they’re super accessible (as long as you book a tour with Mercat Tours). I personally cannot imagine visiting Edinburgh and NOT visiting this piece of history with the craziest past and just as crazy present. Who knows, you may even have your hand tugged by a little boy or get yelled at by the ghost version of an old man yelling “get off my lawn!”.

Follow See World Not SeaWorld on WordPress.com
Join 124 other followers