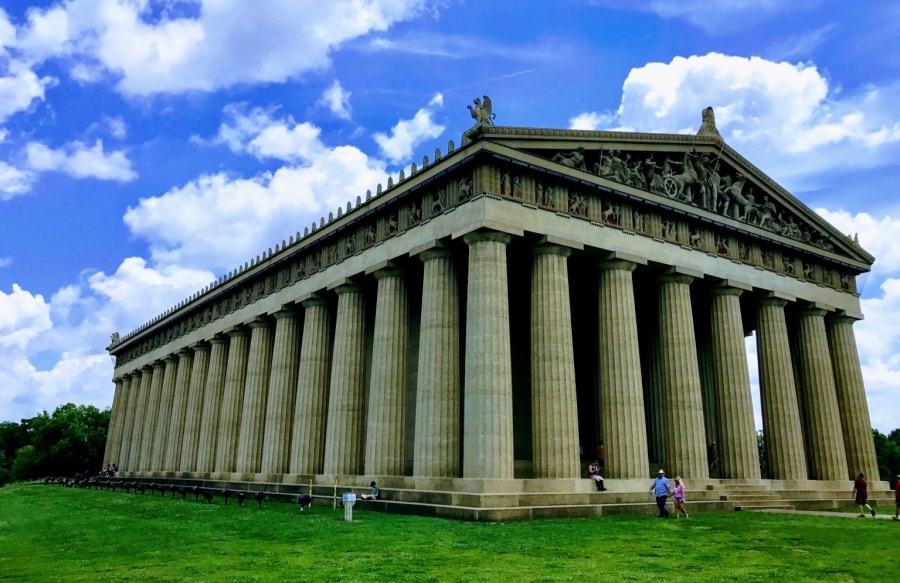 If you’ve ever wanted to visit Greece and see the ancient Parthenon, but can’t make the trip, fear not! All you need to do is take a short flight to Nashville, Tennessee. The Nashville Parthenon, built by architect William Crawford, is a full-scale replica of the original Parthenon in Greece. Located in Centennial Park, at 2500 West End Ave., it opens daily at 9am, closing at 7pm M-TH and at 4:30pm Fri/Sat/Sun. It costs $10 per adult, $8 per youth (4-17), and $8 for seniors (62+). Children under 4 are free. It’s well worth the price of admission. The Parthenon does close for a myriad of holidays, so best to double check the website before planning a trip! https://www.nashvilleparthenon.com/

It was built to be the centerpiece of the 1897 Tennessee Centennial Exposition (essentially an old-school mega-fair). Since Nashville’s nickname is “Athens of the South“, the Parthenon was an obvious choice. Interestingly, it took the ancient Greeks nearly 10 years to build the original Parthenon (447-438 BCE), then the reconstruction also took 10 years to complete (1921-1931). In 1972, it was added to the list of U.S. National Register of Historic Places.

I was completely overwhelmed with the sheer enormity of it, as it really is a sight to behold. Originally made of plaster, it was reconstructed in 1920 to be made entirely of concrete. On the first floor is a small museum with artifacts from Greece, plus an art gallery featuring different exhibits, which change about every 3 months.

On the second floor is a gigantic, 42-foot-tall gold statue of the Greek goddess Athena, surrounded by various Greek artifacts and information boards. Apparently, this is what the inside of the actual Parthenon would have looked like, complete with an incredibly large statue of Athena in the center of the room. She was added in 1990, but had to be placed back into scaffolding in 2002 so they could gild her with gold. This was to more closely resemble the original Athena statue.

Overall, it would be sad to miss such a wonderful reconstruction of ancient Grecian history if you’re ever in Nashville or the surrounding areas. The Parthenon is only a short, 2-mile drive from downtown and Broadway (the main party strip), so a very easy outing if you’re staying in that area. It’s a nice, historical reprieve from the constant yee-haw party culture that consumes Nashville. Come and see this amazing replica yourself!