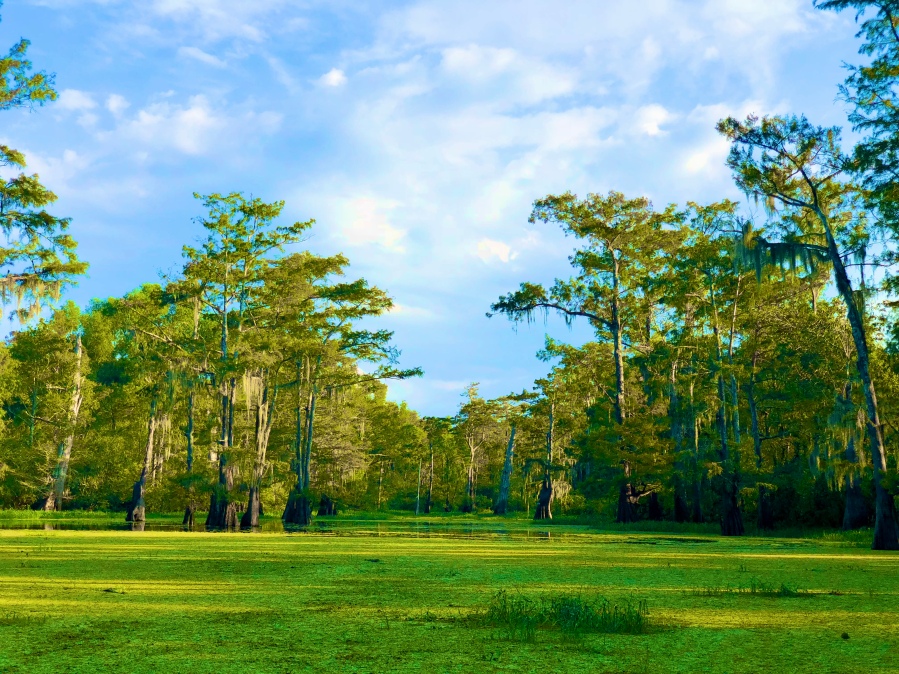 A swamp tour has been at the top of my bucket list for many moons, and I was beyond thrilled for “Swamp Day” during my trip to New Orleans. Some people would never step foot in a swamp, let alone for fun, but hey, to each their own! Yes, there were bugs, and possibly snakes, and alligators, and God knows what else, but that was all part of the allure of it (especially the gators). We researched the tours intensively, because most were quite pricey, and they put you on a large boat with like 15 to 20 other people. These tours were also all located closer to NOLA, so naturally they had more traffic and needed to move more bodies through, plus they can charge the higher prices because people will pay it. We decided we’d have better luck expanding our search, as there is no shortage of swamps all around southern Louisiana.

We chose Last Wilderness Swamp Tours, located about an hour away from NOLA in Plaquemine, Louisiana and were very satisfied with our choice. It cost $40 per adult, and $35 per children under 10 (as well as tip – can’t forget the tip!). All the other tours will found cost between $75 – $100 per person (not an exaggeration). They didn’t give an exact address, but told us to meet them at this small (rather creepy) gas station in the middle of nowhere. Here we met the guide and other swamp tour participants. We then all followed the guide in our cars to the dock, caravan style. It’s kinda weird, but it was easier doing it this way because the dock is a bit hard to find.

The *only* letdown was we did not see an alligator, which was a bit of a bummer. Our guide – who looked like he could be the long-lost 5th “Duck Dynasty” brother – explained that this company is one of the only companies that does not bait or feed the alligators; therefore, you do have a significantly lower chance of seeing one. However, their reasons for doing so are solid and it was hard to disagree with them. The guide explained that Last Wilderness Swamp Tours feels like it is morally wrong to feed the gators because it puts the tourists at risk, the locals at risk, and the food they feed them is not good for them. He said they would rather offer you an authentic experience and if you see a gator, great, but if not, then so be it. As it would be, the gator gods were not on our side, but that doesn’t mean the entire thing was a bust. In fact, it was phenomenal!

During the 2-hour tour, the guide took as all over the Atchafalaya Basin, where he explained the ecosystem and pointed out various wildlife (mostly different species of birds). We learned about the different trees, rising and falling water levels, and even saw a few flying fish. We learned about the crayfish industry in Louisiana and how important it is to them.

We even got to hold a real-life crayfish who had just gotten done molting, so she had no claws and was completely harmless. It was a very informative tour and our boat was small, which is something we definitely wanted. There were only 6 people on the boat total, including the guide. It was a small, open, propeller-powered boat and surprisingly a smooth ride. I really enjoyed being in a smaller boat because it made the experience more personal and authentic. We researched about 8 or so companies, and the smallest boat was 12 or more people, except for Last Wilderness Swamp Tours.

Overall, I would highly recommend Last Wilderness Swamp Tours to anyone. They were communicative and very reasonably priced, and our guide was super nice and extremely knowledgeable. I never felt worried or scared while out in the swamp, because our guide kept it very professional and I knew we were with someone who knew what he was doing and where he was going. I know people who have taken the other tours closer to New Orleans, where they bait the gators so you’re guaranteed to see one, and they were satisfied with them. I personally prefer the smaller boat with a more personalized tour, but that’s just me! Whatever you choose, I highly suggest taking a Louisiana swamp tour because it really is a great, cool experience.

Follow See World Not SeaWorld on WordPress.com
Join 124 other followers