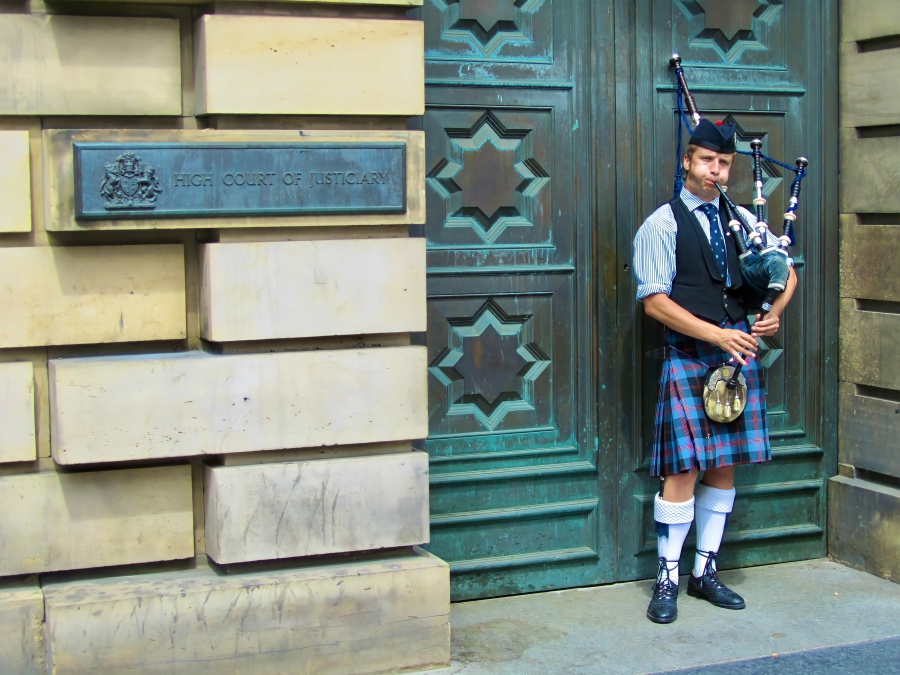 If I were asked, “Name the top five cities you’d like to live in for at least a year”, Edinburgh would make the list. I’d also put Edinburgh in the top three cities we visited in Europe. There’s just something special about the Gothic architecture combined with the vibrance of the city, and of course, its infamous dark past, which includes the Edinburgh Vaults. It warms my heart. 🖤

As the capital city of Scotland, it’s the 2nd-largest city in the country, coming in behind Glasgow by around 124,000 residents. It’s the 9th largest city in the United Kingdom. Edinburgh has a long history, with the city charter drafted in 1125 and city status officially granted 508 years later, in 1633. Edinburgh Castle (said to be the inspiration for Hogwarts) was built sometime during the 12th century or slightly before, although the exact date/period is unknown. Most agree that it was probably built during the reign of David I (1124 – 1153). It was after the construction of this castle that the towns of Edinburgh and Canongate (a nearby settlement) began to grow and trade.

The greater Edinburgh limits sits on the Firth of Forth, but the main downtown area is more inland, so we had to shuttle in. The 9-mile drive took about 15 minutes. Once we were dropped off in Old Town, it was time to take a whirl on the Scottish HoHo. This HoHo was phenomenal and took us by all the iconic stops including Edinburgh Castle, Hanover Street, Waverley Bridge, Canongate (a street/district), The Queen’s Gallery and Holyrood (the official Scottish home of Queen Elizabeth II), Our Dynamic Earth (a museum) and Arthur’s Seat (a large, famous hill), and much more.

We didn’t get to stop at or explore all the above mentioned places, but we saw many and visited a few. We also came upon a couple of statues on our own. Here are a few of the places/statues we stopped at and/or learned about.

Arthur’s Seat is an ancient volcano, comprising the main peak of a group of hills in Edinburgh. It’s about 1 mile east of Edinburgh Castle and just east of the city center. It rises to 822 feet (250.5m), well above the city, providing an excellent view of Edinburgh and the surrounding rolling Scottish countryside. It’s not a hard hill to climb by any means and is very popular for “hillwalking”. It’s allegedly named after the legendary King Arthur, although there is no official traditional Scottish Gaelic name for it. Due to the alleged connection to King Arthur, many suggest it as a possible location for Camelot, the fabled castle and court of the great King.

Next is the Statue of Greyfriars Bobby, a teeny, little Skye Terrier who became known in the 19th-century for spending 14 years guarding the grave of his owner until he passed away himself. Little Bobby was born in 1855 and passed away in 1872, at the age of 16. Sadly, this little pup spent about 80% of his life perched upon his deceased owner’s grave, guarding it from all unknown advisories. He belonged to John Gray, an Edinburgh City Police watchman, who was buried in Greyfriars Kirkyard. The story goes that Bobby spent the rest of his life sitting atop the grave, being cared for by the kindest of strangers. After he passed, he was buried in the same graveyard as his owner, not far from Gray’s grave. A year after his death, an English philanthropist named Lady Burdett-Coutts was touched by the story and had a drinking fountain erected and topped with a statue of Bobby.

The Statue of Fifth Duke of Buccleuch is right outside St. Giles Cathedral, in Parliament Square. It’s a statue of Walter Francis Montagu Douglas Scott, the 5th Duke of Buccleuch and 7th Duke of Queensberry. Sir Walter was an instrumental player in bringing King George IV to Scotland in 1822 for the first royal visit since the 1745 rebellion. He also became Lord Lieutenant of Midlothian from 1828 until his death, as well as the Lord Lieutenant of Roxburgh starting in 1841. He also established the harbor at Granton, a port that could be used 24/7, something the Leith Harbor could not do. Overall, he was clearly rather important and influential in the history of Edinburgh.

Then there’s the Statue of David Hume, located on the Royal Mile. It’s about a one minute walk from the Statue of the Fifth Duke of Buccleuch and St. Giles Cathedral. Hume was a philosopher and historian born in Edinburgh who lived from 1711 until 1776 and is considered one of the Scottish Enlightenment’s most famous and lasting figures. He’s best known for his highly persuasive systems of philosophical pragmatism, skepticism, and naturalism. The statue oddly portrays him as a Greek philosopher, although he wasn’t Greek at all. It sits right outside the High Court of Justiciary (Scotland’s supreme criminal court), which is where we got the delight of watching a legitimate Scottish bagpiper play.

Next is Edinburgh Castle. One major plus of the Edinburgh HoHo is that you get a 360 view of Edinburgh Castle, perched up high on top of a massive, rocky hill. Built literally on top of volcanic rock, it’s sometimes referred to as Castle Rock. It was built sometime starting in the 11th century through the 21st, making it a continuously built upon dwelling. This castle represents the real-life embodiment of how I picture Royals of the days past viewed themselves high above “common folk”. Although, I’m sure the castle was put there for more strategic, safety-related reasons. This castle has been involved in numerous major historical moments, including the Wars of Scottish Independence (1296 to 1357), the Siege to free James III of Scotland (1482), the Lang Siege (1571 to 1573), and narrowly escaped being destroyed in WWII when the Luftwaffe (part of Nazi Germany’s air forces) bombed Edinburgh.

This castle is also allegedly the inspiration for Hogwarts in the Harry Potter series. The author, J.K. Rowling, wrote some of Harry Potter in Edinburgh, at a café called “The Elephant”. It is said that she took inspiration from the landscape for much of her characters and locations. In my opinion, this is pretty evident in her depictions of Hogwarts and Hogsmeade (the town near Hogwarts) which majorly resembles Edinburgh Castle and the Royal Mile.

The Royal Mile is a one-mile series of five (west to east) streets that make up Old Town Edinburgh: Castlehill, the Lawnmarket, the High Street, the Canongate, and Abbey Strand. It runs between two significant spots in the city – Edinburgh Castle and Holyrood Palace. Here is where you will find most of the history and Gothic architecture, as well as all things touristy. In my opinion, the Royal Mile is fantastic and kind of like the Scottish version of the Las Vegas Strip or Bourbon Street in New Orleans. The only difference is the absence of questionable life choices and alcoholism. Tourist shops are located here, along with street performers, tours, restaurants, pubs, and much more.

We walked the Royal Mile and meandered into a few shops, but we also got caught up watching a few of the street performers. The first was a magician, who we watched eat a 5-foot balloon like it was nothing. Another was a girl dancing with a lovely contemporary, who managed to rope my stepdad in a quick dance.

Medieval Scotland used to be a wild time, as we learned from our “Vaults” tour guide. After meeting up with her at Mercat Cross (a “cross” is a structure that marks a “market square”), she took us on a mini walking tour through Royal Mile and Old Town. Here is where we learned more about the city’s history and way of life in the 16th and 17th centuries. We learned why alleys in Edinburgh are called a “close”, because the buildings are thisclose to one another. She also told us that they used to nonchalantly dump their chamber pots full of urine and feces out of their windows straight onto the alley way below like godless heathens. It’s no wonder that the Black Plague loved this city.

Speaking of the Black Plague, Edinburgh suffered greatly through intermittent bouts of the disease throughout history, first starting in 1349. However, it was the plague of 1645, the Great Plague, that really devastated the city. It was this plague that took out approximately half of Edinburgh’s population, while the nearby port area of Leith suffered even greater, presumably from the constant flow of ships from all of Europe passing through. To cope with the large number of deaths, “burial pits” were dug at places like Burgh Muir and Leith Links. The actual death toll was never recorded, but it’s estimated that around 17,500 of Edinburgh’s then 35,000 population died during the Great Plague. Yet after this, the Black Plague never again touched Edinburgh.

As for the Vaults, I won’t go into that in this blog, as it has its own entry – (The Historic Edinburgh Vaults (Scotland).). However, the Vaults are amazing, and if you ever get the chance to visit them, TAKE IT.

After we finished exploring the Vaults, we ate lunch, then hopped back on the HoHo for one last whirl around the city. I cannot wait for when I can go back to Edinburgh and spend about a week there. I feel like I only scratched the surface of this beautiful, medieval city that has so much more to offer. I will absolutely take another tour of the vaults because I feel we were a bit shortchanged since we weren’t playing with a full deck of cards, i.e. more information about the ghosts. Overall, if you ever get the chance to visit Edinburgh (or just Scotland in general) please take it, because it really is a great, welcoming, charming, gorgeous and historic place!